Even mythic figures like Pecos Bill and Paul Bunyan fall short of the fame and notoriety of Judge Roy Bean, an actual person.

A lifelong scoundrel, he began his term as judge prematurely in a tent city saloon in a construction camp called Vinagaroon. Eventually he was duly authorized, probably, but chose to move on.

In the 1880's Bean showed up in Langtry, where the railroad had bought property with the explicit proviso that he could not buy or lease it. So he squatted, running his saloon/courthouse illegally on the railroad's right of way.

The saloon was named "The Jersey Lilly," after singer Lillie Langtry who Bean had long fantasized over.

Having once been hanged himself, the only sentences Bean handed out were monetary fines, which he then pocketed.

Boxing was illegal in the U.S. in 1896, but Bean garnered national attention when he arranged a world championship match in little Langtry. Spectators, the press, and the Texas Rangers flocked to town by train.

The prizefight actually took place on a sand bar in the Rio Grande, beyond the reach of the U.S. lawmen and far, far beyond the concern of Mexican authorities. James Fitzsimmons knocked out World Champion Peter Maher in 95 seconds.

Even today Langtry is extremely remote and isolated, so it's astonishing that any resident could become so legendary to the world, prompting numerous movie and television portrayals.

Today the town exists mainly to serve tourists who come to see the Jersey Lilly Saloon. The state's Judge Roy Bean Visitor Center offers a rest stop, a small park, an amusing museum, a few souvenirs, and anecdotes to go along with the original saloon and Judge Bean's "Opera House."

The town is otherwise limited to a post office, a general store, and perhaps an ice cream bar. There are a few homes, but not many businesses. 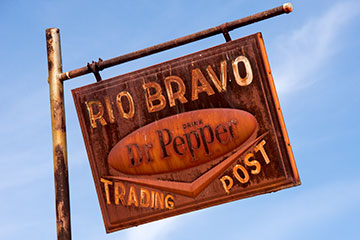 The only other site of note is the Pecos High Bridge about 25 miles away.

The original bridge was called the Pecos River Viaduct and at 321 feet above the water, it was for many years the highest bridge in the country.

Highway 90 crosses over the Pecos River Bridge nearby, where a rest stop provides picnic tables and access to the International Amistad Reservoir. 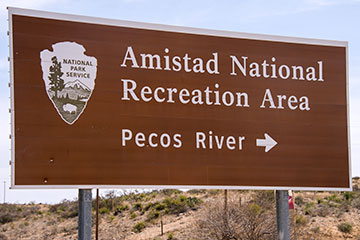 And by the way, some years after Bean's death, Lillie Langtry actually stopped by to visit the the Jersey Lilly Saloon. 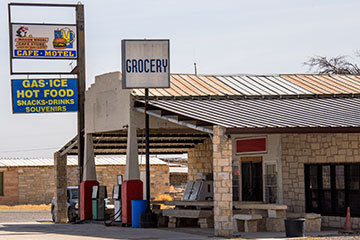 There is a gas station.