At its best it's just a village on the Rio Grande, but Lajitas somehow has a first class golf resort and an international airport suitable for some jets.

There are no traffic lights when you motor through town. There are no stop signs either -- probably because there are no real intersections. Estimates of the population range from 24 to 75, so traffic jams are extremely rare.

Lajitas is the proverbial wide spot in the road -- but what a road. Many consider it to be the greatest road in the U.S. for motorcycles -- "the River Road" -- and it parallels the Rio Grande, boasting spectacular vistas of Mexico. That's why you go to Lajitas, not for the damn golf.

In addition to golf, the resort has an equestrian center, a shooting range, and even a "Star Gazer Mesa" if you want to study the famously dark skies of the Big Bend -- after you cruise down the River Road.

In the old days, Lajitas was home to a legendary trading post that serviced the locals from both sides of the river.

Way back, Pancho Villa himself came down the River Road -- with General "Black Jack" Pershing in pursuit. At the turn of the century a cavalry post was established in Lajitas and now there's the Border Patrol.

For years the town's great claim to fame/notoriety was that the mayor of Lajitas is a goat, a drunken goat at that.

This is also the route to the Big Bend Ranch State Park, home of the Barton Warnock Visitors Center.

But it all leads back to the road -- the River Road. Curves. Hills. Mountains. And History.

This is the trail of the revolutionaries, of horse thieves and rustlers, of Mexican soldiers, of Commanches and Apaches, and the U.S. Cavalry. Even today, it looks just the same as when they rode the river.

Remember, before you leave Lajitas and head down that famous Rio Grande, be sure to stop at the lone fuel pump at the last gas station. 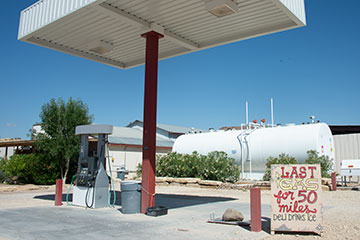 Today it's sometimes called a semi-ghosttown, but Redford is one of the oldest communities in the country.

This modest area along the Rio Grande has long been known for its farms and ranches and as far back as 8000 B.C., it was inhabited by indigenous hunter-gatherers.

The first Spaniards arrived almost ten thousand years later, in 1535. By 1600 or so they built a mission, the San Pedro de Alcántara de los Tapalcomes.

Because of the fertile land and abundant water, the cultivation of crops was successful and livestock thrived.

The village of El Polvo (the dust) was created in 1871, but it was usually referred to as Vado Rojo (the red crossing) which eventually became the Red Ford, and finally Redford.

In 1885, federal troops were stationed here at Camp Polvo (Camp Dust) to guard the area from raiding Apaches.

As the turn of the century approached, a combination of a sustained local drought and the growth of nearby mining operations led to a decline in the population.

The U.S. Cavalry returned to Camp Polvo in 1916, during the Mexican Revolution. Since then, things have settled down.

That's about it. Keep moving. 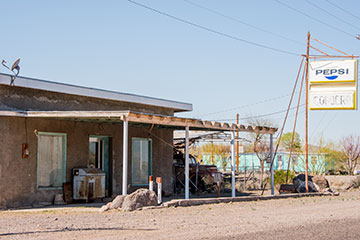 There is no gas station. But you knew that.